ABSTRACT
The nature of waste generated through human activities assume more complex forms with industrial revolution and subsequent steady rise in technological advancement. The complexity of these wastes generated necessitated the adoption of sustainable waste management to mitigate its negative impact on the environment. It is on this basis that this paper examined the challenges of solid waste generation and Management in Ado-Ekiti, Nigeria. 400 copies of questionnaire were administered on randomly selected respondents from five different zones in the study area. Secondary data were collected mainly from Ekiti State Waste Management Authority, National Bureau of Statistics as well as from GIS Spatial Nigeria Limited. Data were analysed using tables, frequencies and percentages. The study discovered that delay in collection of wastes, lack of public awareness on the importance of good sanitary condition and dumpsite being far from the populace as the major challenges of solid waste generation and management in the study area. The Study recommends that the government should increase the budgetary allocation of Waste management agencies to enable them perform their duties effectively and in an environmentally friendly manner.

Introduction
Waste is an inevitable by-product of socio-economic and institutional activities. As long as man is in existence, he uses, stores up, and disposes off materials (wastes) thus making him inseparable from waste (Hoornweg, 1999). Furthermore, the complexity of solid waste generated in modern civilization is directly related to the living standard, socio-economic and cultural attributes of that particular environment (Fakere, Fadairo,and Oriye,2012). Consequent upon which the strategies for the management of the waste generated vary in terms of the region and the available resources.
In Nigeria and other developing countries, some of the prominent waste management problems witnessed include but not limited to: indiscriminate dumping, poor means of storage, inefficient transportation and insanitary disposal. All these problems are all a function of certain factors which include: population increase, Attitude of people towards waste management, location of Open dump sites without consideration to the surrounding land uses and in most cases these sites are very far from the people.
It may seem as though that urban waste management issues are difficult to deal with, however the root cause sterns from the fact that the rate of collection and evacuation is inversely proportional to the rate of generation which makes solid waste accumulation a major source of environmental nuisance in Nigerian cities (Uwadiegwu and Chukwu, 2013). For instance, it is estimated that the rate of solid waste generated is about 0.43kg/head per day and 60 to 80 percent of it are organic in nature (Ogwueleka, 2009). Lagos alone generates over 10,000 metric tons of solid waste daily (WHO, 2006). The volume of solid waste generated sometimes over-whelm urban administrator’s capacity to plan for their collection and disposal. Attempts to solve this problem effectively have given rise to myriad of strategies involving sizeable amount of capital and human resources. These strategies yielded little or no positive impact on the physical urban environment of Nigeria cities (Kayode and Omole, 2011).
In Ekiti State, the Ekiti State Waste Management Authority (EKSWMA) exists as the sole public agency responsible for waste management in the state. The waste management authority was established because, it was assumed that individual Local Government Authorities were incapable of performing the function of waste management because at the time of its establishment, solid waste management situation in Ado- Ekiti was “nothing to write home about” and embarrassing to the populace (Awosusi, 2010). However, currently in the state, unsightly scenes of heaped decomposing and semi-decomposed domestic wastes can be seen in the streets. Studies have shown that uncollected waste have contributed to flooding, breeding of insect and rodent vectors and the spread of diseases such as cholera, malaria, typhoid fever in Nigeria (Nabegu, 2010).This results in a delay in the collection of waste by the waste management board thus the populace resorting to dumping the wastes in the streets and drains, thereby littering the environment with rubbish (See also Ibimilua and Ibimilua, 2015). This is evident in the popular Oja Oba market in the capital city of Ado-Ekiti.
From the above, It is evident that not much success have been achieved by the Ekiti State Waste Management Authority with regards to the effective collection and management of waste in the state due to the various reasons which include; Poor Funding, inadequate Manpower, Lack of awareness e.t.c. However, Issues such as poor funding can be ameliorated with the inclusion of the informal waste sector in the Solid waste management process. The success that accrue to most countries in terms of the inclusion of the informal waste sectors cannot be over emphasized.
It is in the light of this that this paper examined the challenges of solid waste collection and management in Ado-Ekiti.

The Study Area
The study area is Ado- Ekiti, Ekiti State, Ado-Ekiti, an ancient city in Nigeria is located between latitudes 70 331 and 70 431 North of the equator and longitudes 50 071 and 50 221 East of the Greenwich meridian. It covers approximately 5888.9 km2 bounded by Kwara State to the North, Kogi State to the East, Osun State to the West and Ondo State to the South. The State is mainly an upland zone, rising over 250m above sea level and with rock outcrops.
Ado-Ekiti has a total population of 313,690 people going by the 2006 Population Census (NBC, 2007), with the upsurge in urbanization trend in the region. The projected population as at 2017 using a growth rate of 2.5% stands at 411,553. An increase in population will naturally lead to an increase in the amount, complexity and types of waste generated (Ogwueleka, 2009). In Ado-Ekiti, a corresponding increase has equally been evident as seen in the inability of the waste management agencies to handle and manage the waste generated by an ever increasing population (Ibimilua and Ibimilua, 2015).
Commercial activities in Ado-Ekiti are considered as one of the major factors contributing significantly to the generation of waste because traders do away with cans, papers, nylon, leavese.t.c during trading transactions. The composition of waste generated in Ado-Ekiti are predominantly food remnants, followed by plastic, rubber, nylon and polythenes ash and dust, papers and cartons as well as leather and skin. Others are tin and metal, broken bottles and glass, wooden materials, rags and textiles, as well as aluminum, (Ibimilua and Ibimilua, 2015).
In the study area, the predominant method of waste disposal in the study area are; disposal at public units to be collected by the Ekiti State Waste Management Authority (ESWMA), collection by vendors, burning, burying, composting, on-street dumping, e.t.c.

Methodology
Data for the study were collected from both primary and secondary sources. The methodology for primary data collection were preliminary study, observation, and administration of questionnaires.
The questionnaire was designed using Likert scale (Likert, 1932) and was based on the objectives of the study. The questionnaire ascertained; the Challenges of Solid Waste Generation and Management in the study.
The population of the study area is 313,690 (NBS, 2007), however with an annual population increase of 2.5% (NBS, 2007), the population of the study area is projected to be approximately 411,553 in 2017. From the projected population of the study area the sample size of 400 was determined using YaroYemani’s (1964) equation.
For field data collection, simple random sampling method was used. The study area was grouped into five zones (A,B,C,D,E). (see Table 1 for areas covered by each zone). Eighty (80) questionnaires were administered on respondents in each zone. Across the five zones a total of 400 copies of questionnaire were administered, out of which 395 were retrieved on the spot to ensure a 98.8% returns, with all being good and used for analysis. 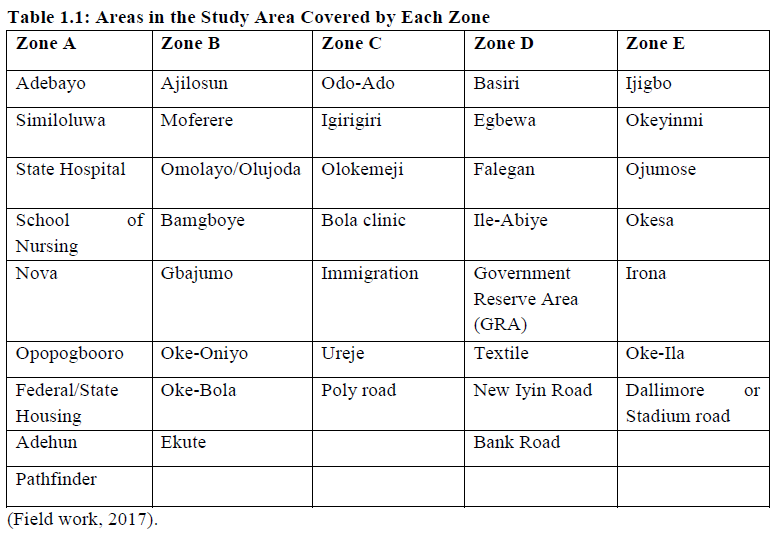 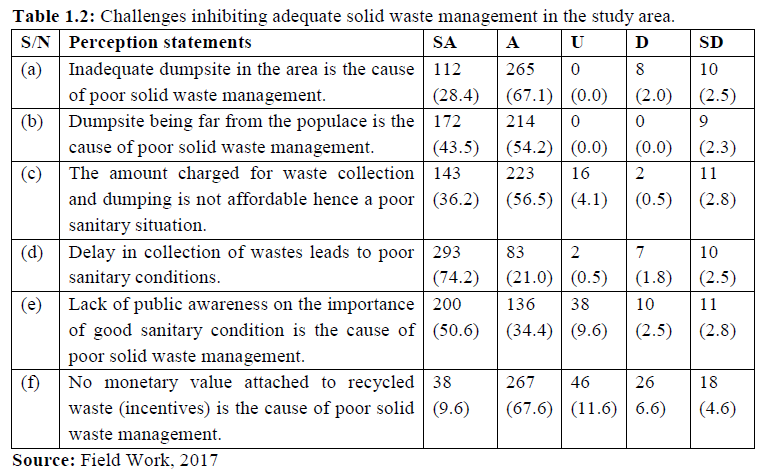 In Summary, Over fifty percent (50%) of the respondents identified; inadequate dumpsite in the area, dumpsite being far from the populace, the amount charged for waste collection and dumping is not affordable, delay in collection of waste, lack of public awareness on the importance of good sanitary condition, as the challenges inhibiting adequate solid waste management in the study area.
Table 1.3 shows the recommended options for improved solid waste management in Ado-Ekiti. The results showed that provision of more waste containers; 391(99%), provision of incentives for recycled wastes; 340(86%), timely collection of wastes; 390(98.7%), environmental education and awareness; 380(96.2%), reduction in the cost waste collection; 387(98%), subsidizing the cost of waste bins; 391(99%) and provision of more approved dumpsites; 393(99.5%) are recommended options for improved solid waste management in Ado-Ekiti. 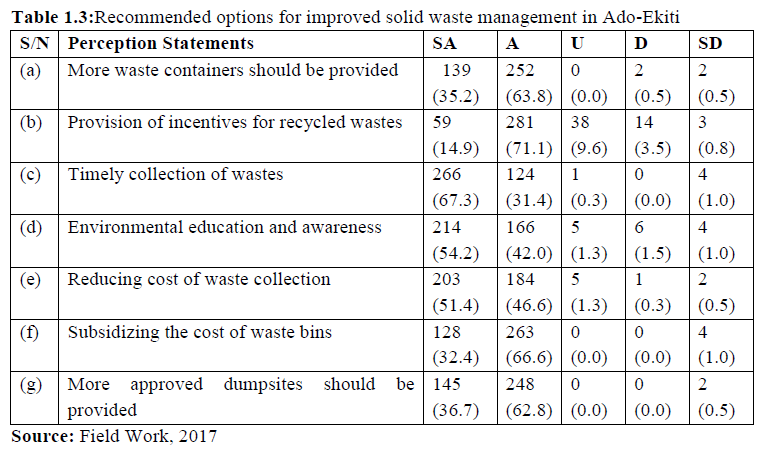 The facts depicted by these data have proven that all suggested recommendations by the respondents must be implemented to achieve a sustainable waste management Practice in the Study Area.

Recommendations and Policy Implications
The paper recommends that more waste dump centres should be provided for the waste companies. This will enable the populace to go to these dump centres to dump their wastes. By this habit of dumping wastes along the streets and curbsides will be reduced. Secondly, the government should support the waste management agencies with more waste disposal vehicles, this will reduce the incidence of delay in waste collection. In addition, the roads leading to the landfill sites should be repaired to reduce the rate at which these waste disposal vehicles break down during the course of their movement from the collection points to the landfill sites. Thirdly, Government should make available funds in form of loans to persons’ who wish to join the waste management sector. With this initiative the government will reduce the burden of waste management on the Local Government Councils who have limited resources at their disposal to manage the incessant increase in the amount of waste generated.
Government by increasing the budgetary allocation for waste management Agencies will go a long way in motivating the agencies to carry out their waste management duties effectively. Equipment such as compactions trucks and waste bins should be provided at strategic points in the study area, to ensure proper solid waste management. Problems like delay in collection, waste bins being always full, indiscriminate waste disposal will hence be ameliorated. Lastly, more recycling firms for plastics, iron and aluminume.t.c should be established. This programme if implemented will boost the activity of the informal waste collectors and more wastes will be recycled from the wastes stream thus leading to the longevity of our landfill sites. In addition, organic wastes should be processed in such a way as to produce fertilizers for our crops and general agricultural purpose. If this stated recommendations are implemented the waste management agencies will be able and capable to carry out their duties effectively and implement the reduce, reuse and recycle policy of sustainable waste management.